A gay Nigerian man, identified as Ayo, has taken to Instagram to share his testimony of how he tested positive for HIV after he was gang-raped.

Ayo said three hoodlums raped him 5 years ago, when he was only 19, because he was gay. According to him, he lost his virginity from the rape and later tested positive for HIV.

He said he faced inhumane treatments because of his sexual orientation. Adding that he lost his home and family in the process.

However, he stated that his HIV status made him start living healthy. He started worrying less, abstained from smoking and drinking, also started eating healthy and taking his medications.

Consequently, his life choices has positively impacted his health and he’s now healthier and his viral load is “undetectable” while his CD4 is high.

Read his full write-up below,

I could remember last 5years ago
😭😭😭😭😭😭😭😭😭😭
What I pass through from 3 hoodlums
I was thoroughly beaten and gang-raped
All because I’m Gay…they took advantage of me
I was 19years old boy then, I suffered humiliation
Arbitrary arrest from police,inhuman degrading treatment,I lost my precious Home at the age of 19years..no parents no family…it really hurts to be an orphan….after I lost my virginity from the raped….having unprotected sex from those hoodlums I WAS TESTED POSITIVE….being positive my mood changed…I started my medication and think less…I stay away from smoking and alcohol…I eat Good fruits and vegetables…thanks to God I’m a testifier now
I’m undetectable my CD4 850 viral load 10
It really worth testimony 🙏🤦im looking healthy and stunning…being HIV positive is not the end of life…it reveals the other side of you…my aims of sharing my life threatening story as an orphan,so that people can learn from this…. 5years living positively 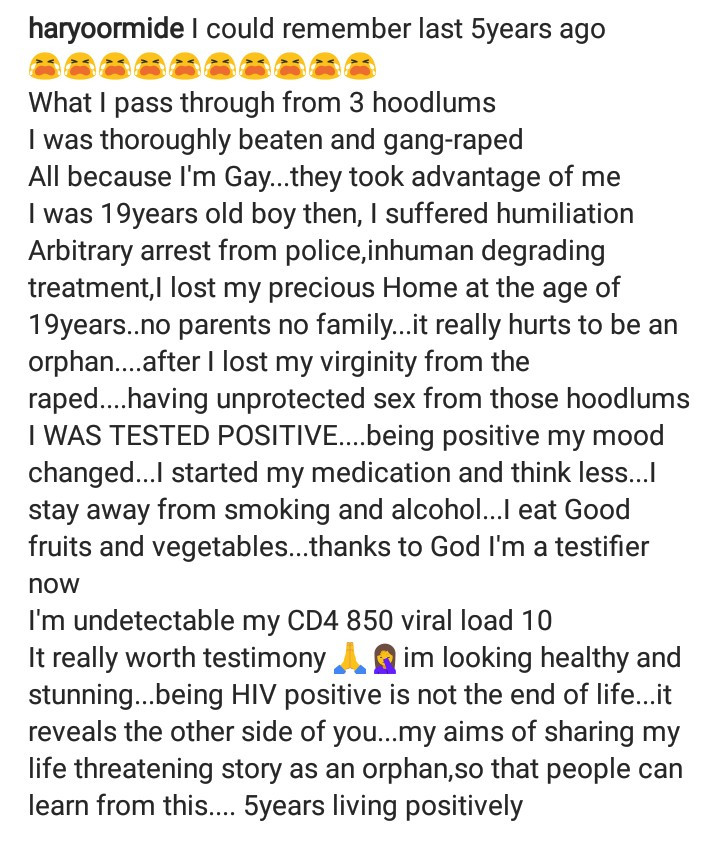